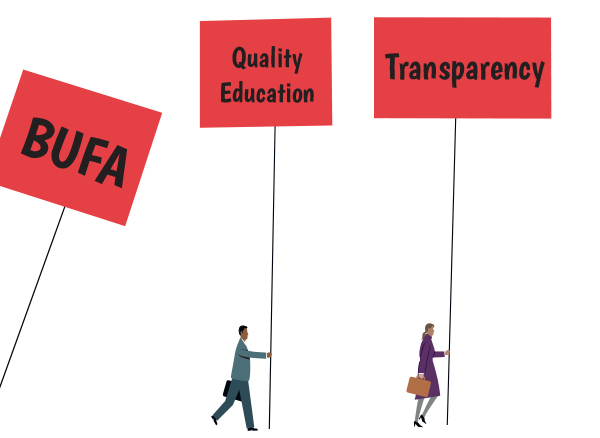 In September 2013, elected Senators at Brock University derailed a unilateral attempt by the institution’s president to establish a process for reviewing and prioritizing academic programs outside of the university senate’s purview.

The successful mobilization in opposition to the Presidential Taskforce, spearheaded by the Brock University Faculty Association (BUFA), offers a number of important lessons for faculty concerned about the state of collegial governance at their institution, the role faculty associations can play in defending against administrative end runs, and ultimately strengthening the democratic capacity of university senates.

On June 28, 2013, Brock University’s president announced via email the establishment of a Presidential Taskforce on program review. Following in the footsteps of several other North American universities, Brock’s president wanted the Taskforce to review and prioritize all of the university’s programs (both academic and non-academic) using Robert C. Dickeson’s now infamous book, Prioritizing Academic Programs and Services, as a guide. The hand-picked members of the Taskforce would be responsible for prioritizing the university’s programs and identifying units for reduction in funding, phasing out, consolidation, or (in theory) enhancement. The Taskforce would then report its findings directly to the president, who, in turn, would ask Senate to act on the recommendations. The Taskforce held its meetings in secret, with no observer from the faculty association or other campus groups, and no record of minutes made public. The eleven-member committee included just three faculty members, and excluded representatives from the university’s two largest faculties and the library.

From the outset, the BUFA leadership expressed deep reservations about both the process by which the Taskforce was formed and the substance and legitimacy of its work. The academic quality of the university’s programs was a matter for the Senate to judge, reasoned the faculty association. Moreover, the Taskforce was not representative, and lacked both transparency and time to consult properly with affected units. The Taskforce brushed aside these concerns and carried on with its work throughout the summer, stubbornly refusing to reform itself in response to criticism. Sensing growing opposition to the Taskforce from the broader university community, the BUFA Executive met to consider its next move. Over the course of the next several months, it would successfully organize a campaign to dismantle the Taskforce and ensure that any review or prioritization of academic programs would be undertaken by Senate.

As a Brock University senator and a member of the faculty association’s executive, I played a central role in the campaign. What follows is my own take on the sequence of events that led to the derailing of the Presidential Taskforce. BUFA developed a two-pronged campaign approach. The first was educative. BUFA members received a series of communications from their union concerning the negative experience of Dickeson-inspired program review exercises at other institutions (namely the Universities of Guelph and Saskatchewan) and the potential negative impact of program review on academic offerings. Members also received updates on the unwillingness of the Taskforce to broaden its membership or conduct its work transparently. The president of BUFA regularly communicated with members through direct emails, newsletter columns, and face-to-face at general membership meetings and pre-Senate BUFA caucus meetings.

The second prong was organizational. A select group of senators received their first update on the President’s Taskforce at a late summer meeting of the Senate’s Governance Committee. Fortunately, a number of key union activists were elected to the Senate a year prior and four of them had been appointed by Senate to the strategically important Governance Committee which, among other things, plays a general oversight role of senatorial business. Individual union activists serving on the Governance Committee orchestrated the passage of two motions related to the review at the August 2013 meeting:

“The Senate respectfully requests that the President direct the members of the President’s Special Task Force to stop their program review and prioritization of academic programs”; and

“The Senate respectfully requests that the President refer any matters concerning the review and/or prioritization of academic programs to Senate for timely consideration, decision and conduct”.

The wording of the motions was strategic. While many BUFA members were sympathetic to the view that the program review and prioritization process was rotten no matter who conducted it, a sizeable number of faculty expressed support for a fair and transparent mechanism for reviewing programs. Because a majority of Senators could likely not be convinced to oppose any and all forms of program review, the motions were crafted in a way that could appeal to those who opposed specific aspects of the Presidential Taskforce. We knew that the votes of outright opponents of program review could be taken for granted.

The motions were also worded in a way that clearly asserted the Senate’s purview over academic review, while deliberately using technical arguments and collegial language in order to give lower-level administrators a reason to support them. With the motions in hand, BUFA activists on the Governance Committee reached out to the other faculty and student members of the Committee in advance of the August 2013 meeting to make the case for why they should support the pair of motions. This advanced organizing gave BUFA activists a good sense for which arguments senators found most persuasive, thus validating the strategic choices made in crafting the motions.

In the end, the motions were adopted by the Governance Committee with only one member, the Provost, opposed (both the President and one Dean were absent, and an Associate Dean abstained). The motions thus became recommendations to Senate. The adoption of the motions represented a stunning victory and a strong rebuke to the president’s Taskforce. BUFA activists knew, however, that they had been fortunate given specific absences at the committee, and that senior administrators would no doubt redouble efforts to defeat the recommended motions on the floor of Senate at its September 2013 meeting.

The faculty association’s organizing efforts were ramped up in advance of the September meeting. Three leading members of the association’s Executive, who also served as elected faculty representatives to Senate, divided up amongst themselves a list of all senators. They each agreed to contact the senators on their list, raise the issue of the program review, make the case for why it should be removed from the purview of the Presidential Taskforce, and determine how the senator was likely vote on the issue. In an effort to help inoculate senators against predictable arguments from senior administration for why the Taskforce should proceed, the organizers developed a question-and-answer handout, debunking the arguments of the opposing side. This inoculation effort proved extremely useful, especially for senators who initially indicated they were on the fence. Finally, BUFA wrote its membership and asked them to contact the handful of Senators who they knew personally about supporting the recommendations of the Governance Committee to put an end to the Presidential Taskforce.

At a caucus meeting organized by BUFA prior to the September 2013 meeting of Senate, BUFA senators coordinated who would speak on the issue, what they would say, and in which order. All of the advance work paid off. Going into the meeting, BUFA knew it could count on at least 45 percent of senators to support the motions.

At the meeting itself, BUFA senators took turns dismantling the administration’s arguments for why the Taskforce was needed to review academic programs. The chair of the Board of Trustees and the dean of the Faculty of Humanities argued for the necessity of the Taskforce, but it was clear which way the wind was blowing. In the end, the motions passed with the support of nearly 60 percent of senators. Student senators either abstained or lined up squarely behind the Taskforce for reasons that still remain unclear. Elected faculty representatives overwhelmingly supported the motion, while most senior administrators and representatives of the Board of Trustees on Senate lined up against it. Interestingly, the deans of the faculties not represented on the Presidential Taskforce broke ranks and supported the motions, along with one other associate dean. These defections demonstrated that the carefully-worded motions had appealed to a broad audience. Shortly after the vote, the president announced that his Taskforce would not continue to review academic programs and Senate asserted control over the process.

With the benefit of hindsight, the faculty association’s campaign offers several important lessons for faculty members concerned about the future of university governance.

University governance matters. Strategic interventions over questions of collegial self-governance are critically important to defending the standards of our profession, asserting control over our working lives, and defending the quality of education in postsecondary institutions. AM

Larry Savage is Director of the Brock University Centre for Labour Studies.