Freedom with limits? The role faculty associations play protecting the speech rights of their members 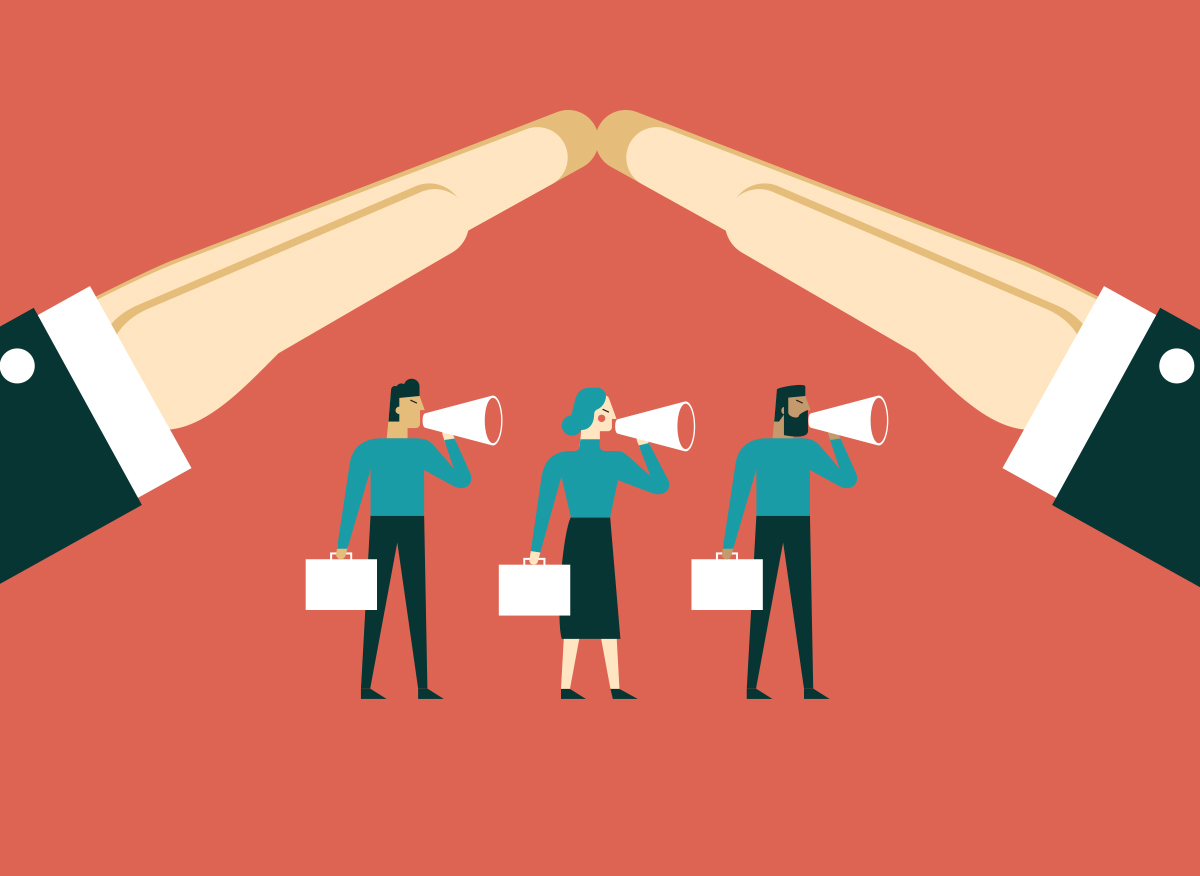 The duty to represent

A university social justice group, with members from faculty, staff, and students, organize an event on campus. One of their speakers is a well-known pro-choice abortion activist. The group is informed by the university president that they must cancel their event. The president cites the university’s Temporary Use of Space Policy as justification for the decision, stating that security costs to ensure the safety and well-being of all attendees would be prohibitive. One of the faculty members in the social justice group calls the faculty association office to see if it can help.

A faculty member informs their class that a panel presentation will take place during their next lecture. There will be two speakers discussing the Israel and Palestine conflict. A few hours following the announcement, the faculty member receives a call from the university’s Office of Human Rights (OHR) informing them of a student complaint about the upcoming presentation. Citing the university’s Respectful Work and Learning Environment Policy, the OHR staff members insist that, as an interim measure to protect the student, the panel presentation needs to be cancelled. The faculty member then reaches out to their faculty association.

In an introductory sociology course, a faculty member criticizes the Truth and Reconciliation Commission, questioning its purpose and efficacy. They further criticize efforts towards decolonization at their own institution, insisting that being forced to include Indigenous content in their courses violates their academic freedom. Later that day, the dean contacts the faculty member via email informing them that, under the procedures outlined in the faculty association’s collective agreement, they are starting an investigation that may lead to discipline. The allegations are based on student complaints about racist comments made in class. The member puts in an urgent call to their faculty association.

In cases like these, what can faculty associations do to protect the speech rights of their members?

One of the foremost responsibilities for a faculty association is protecting the integrity of its collective agreement by ensuring that the agreement’s provisions are correctly and consistently applied. The provision most closely connected to speech rights is likely the academic freedom clause that, in most collective agreements, gives faculty members freedom to examine, question, teach, and learn, as well as the right to investigate, speculate, communicate, and comment publicly without deference to prescribed doctrine.

It is incumbent on faculty associations to negotiate and enforce strong academic freedom language. Such language, for example, commits the university to allow access to a diverse range of knowledge expressions, including those that might be considered controversial, unacceptable, or unpopular. As our first scenario contemplates, academic freedom rights extend beyond our classrooms and can include event organization with controversial speakers.

It is incumbent on faculty associations to negotiate and enforce strong academic freedom language.

Along with speech right protections, associations also negotiate specific contractual limits to academic freedom, including restrictions on the infringement of the academic freedom of others. Indeed, one of the arguments made by those who seek to exclude hateful speech from campus is that the expression of such speech does, in fact, infringe on the ability of some individuals to exercise their own academic freedom. Collective agreement provisions related to harassment and discrimination may also place constraints on campus speech.

Faculty associations clearly play a critical role negotiating, implementing, and enforcing the application of collective agreement provisions and university policies that create and maintain a campus environment free of harassment and discrimination. It is important to note that harassment and discrimination clauses may, at times, be in tension with academic freedom provisions, as reflected in our second scenario.

In addition to negotiating collective agreement provisions, faculty associations also participate in the creation and revision of university policies, including those that may protect or limit speech rights. For example, respectful workplace policies have long been recognized as constraining speech. As our second scenario illustrates, the frequently broad interpretation of “disrespect” encouraged by these policies, coupled with difficulties in implementing timely and appropriate investigations, is frustrating to those charged with disrespectful, harassing, or discriminating speech, as well as those who feel harmed by such speech.

The CAUT Report of the Ad Hoc Investigatory Committee To Examine the Situations of Drs. Isla, Van Ingen & Corman, & Messrs. Wood & Fowler provides an excellent description of how the application of Brock University’s Respectful Work and Learning Environment Policy led to inappropriate charges against instructors for speaking out against a volunteer program promoted by an on-campus religious group.

Given the increasing sensitivity and conflict around campus speech encompassed by these policies, faculty associations should ensure that collective agreement provisions are not violated in the creation or revision of these policies and remain vigilant in monitoring policy implementation. Faculty associations should also move quickly to ensure they have a meaningful role in the development of the new free-speech policies the provincial government is requiring all Ontario universities to implement by January 1, 2019.

Member education is another priority for faculty associations, as it is important for members to understand the many factors (e.g. university budgets, university governance, decolonization) that influence their workplace. For example, our own association, the Brock University Faculty Association, includes an educational agenda item at each general membership meeting, often involving external speakers and/or panel discussions. Educational components within membership meetings provide an opportunity to organize presentations and facilitate access to information regarding the defining characteristics of problematic speech (e.g. Human Rights Code violations, hate- or violence-inciting speech as defined in the Criminal Code) and the importance of speech rights to research, teaching, critique, and analysis.

Increasing member awareness of the potential impact of hostile, inflammatory, and prejudicial speech could be an important focus for such educational efforts. Openly discussing strategies for supporting members of marginalized groups, including individuals within the association membership, are necessary so that they feel empowered to safely exercise their speech rights.

Navigating the needs of a diverse membership

Faculty associations represent, advise, and support members whose workplace rights have been violated. These members may include those whose classroom speech, social media postings, or public lectures have either been restricted or led to discipline, as illustrated in the third scenario above. In fact, it is likely that grievance and arbitration procedures are increasingly being called into action, as universities are pressured to interpret free speech limits both more broadly and more narrowly.

Regarding possible violations, a faculty association could easily find itself caught in the difficult situation of having to defend one member’s speech rights while pursuing another member’s complaint that the speech was either discriminatory or harassing. Situations such as these have the potential to seriously divide an association’s membership. For example, following the controversy over two faculty members’ responses to Wilfrid Laurier University Teaching Assistant Lindsey Shepherd’s classroom speech, Wilfrid Laurier University Faculty Association President Michele Kramer noted the diametrically opposed opinions of those within the association’s membership. In her December 12, 2017 message to members, she explained the association’s need to fulfill its primary mandate, which was to protect its members’ collective agreement rights. This priority prevented the association from advocating publicly on other issues being advanced by some of its members.

Indeed, some faculty members may strongly object to what they see as overly restrictive constraints on speech that violate academic freedom and compromise the ability to have open discussions, which might include emotional, offensive, controversial, and adversarial points of view. Other members may hold equally strong convictions that such speech is discriminatory, harassing, and/or hate inducing, and should not be tolerated. Furthermore, in addition to potentially violating the human rights of others, silencing those who feel invalidated and intimidated may preclude the full and diverse discussions necessary to fulfill our basic educative function.

Silencing those who feel invalidated and intimidated may preclude the full and diverse discussions necessary to fulfill our basic educative function.

Rather than take a position that seeks to uncompromisingly support free speech or to protect vulnerable targets of offensive speech, we suggest faculty associations consider the integrative “inclusive freedom” approach articulated by Sigal Ben-Porath in her 2017 book, Free Speech on Campus and reflected in WLU’s Statement on Freedom of Expression (May, 2018).

In Ben-Porath’s framework, protections of both speech rights and marginalized groups are not necessarily in opposition to each other. She recommends that universities adopt the least possible restrictions on legal speech while simultaneously supporting those individuals and groups who may feel “dignity harm” from the expressed language of others. For example, such support may include providing safe spaces in which those with similar experiences could support each other, targeted resources to bring speakers of opposing views to campus, or assistance in improving individuals’ speaking and organizational skills.

Faculty associations could choose to act consistently with Ben-Porath’s dual and integrative approach. Associations could advance and defend the principle of least restrictive speech provisions in negotiations, consultations, and grievances, while promoting the use of language that leads to a sense of inclusion and invites full participation in the expression of ideas. In addition, associations could provide resources and organize support for faculty members, university staff, and students who may feel excluded or intimidated. It may be that these individuals do not feel able to exercise their own speech rights, or that they feel harmed by the speech of others. Such resources could help alleviate difficulties related to a lack of experience, confidence, or social support.

This focus on providing support and building individual and collective capacity to challenge speech is not an argument that certain types of speech should simply be banned from campus. Such censorship is antithetical to the principles of free and open discussion required in an academic setting and is protected in most collective agreement academic freedom language.

As our introductory scenarios illustrate, faculty associations could be drawn into speech rights issues in numerous ways—various university mechanisms, policies, and practices potentially intersect with the academic freedom rights of members. Situations where speech rights and freedom from harassing or prejudiced speech seem to come into conflict may be uncomfortable places for faculty associations. However, we take the position that, despite the discomfort, it is in all of our interests that universities remain spaces committed to freedom of expression.

Throughout this article, we use the term “faculty association” to encompass unions and associations that represent professional librarians, as well as faculty.