How the “Student Choice Initiative” seeks to silence student voices

For decades, students’ unions have been raising concerns about skyrocketing tuition fees. Now, in an obscene twist, the Ford government is using high student fees as an excuse to attack these democratic organizations and their ability to advocate for lower fees and better universities. 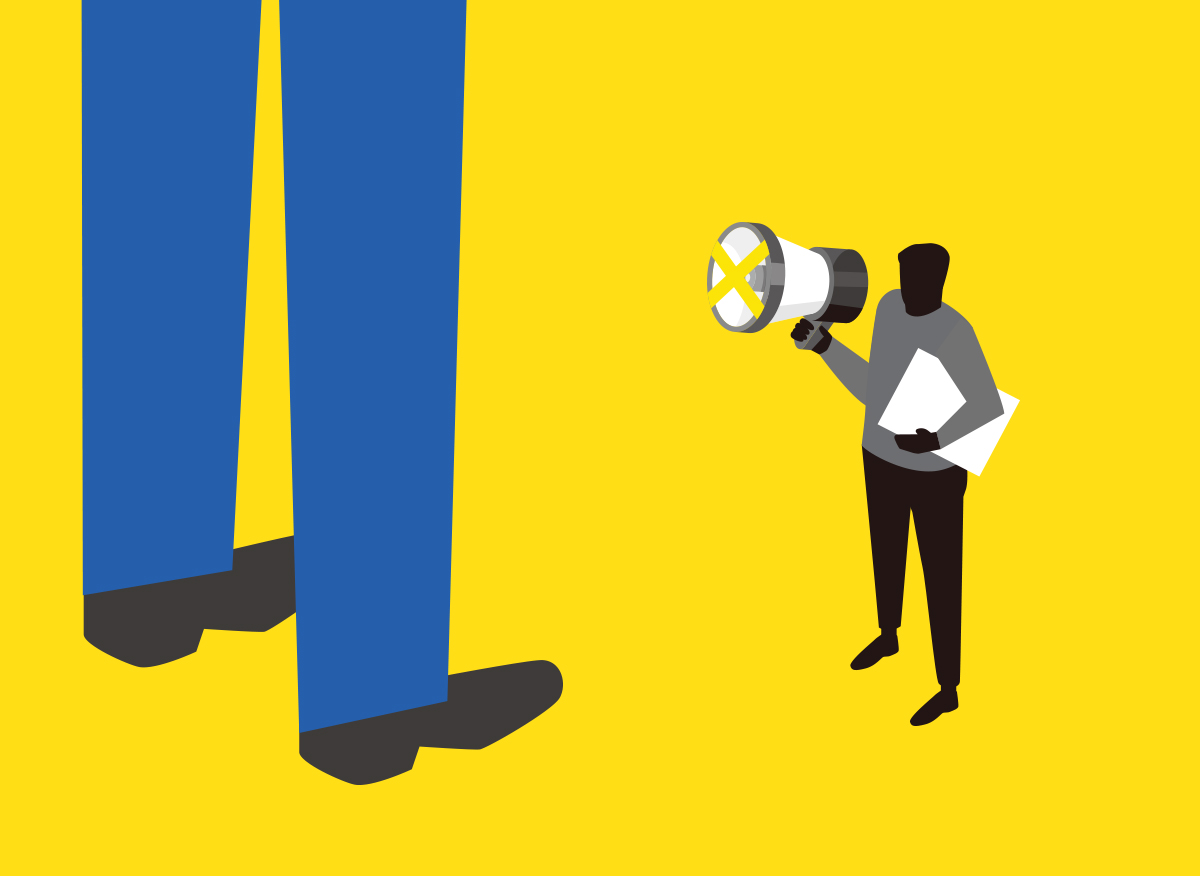 Due to years of declining government investment in postsecondary education, Ontario’s universities are often described as being “publicly assisted” rather than “publicly funded.” Meanwhile, the funding burden has largely fallen on the backs of students who now provide roughly 60 per cent of university operating revenues through tuition and ancillary fees. Year after year, students are forced to pay a greater share of the overall cost of keeping postsecondary institutions running, even as they continue to voice their opposition to this shift on university senates, on boards of governors, and at Queen’s Park.

As major stakeholders in the postsecondary system, students have a vested interest in how institutions spend money and develop policies that affect academic quality, the cost of tuition, and other important services. However, students are often excluded from, or politely ignored at the highest levels of university decision-making, whether that means boards of governors or governing councils. While some institutions have student seats on these governing bodies, student representatives—the only members of these bodies struggling to pay tuition fees—are treated with condescension and find it difficult to influence the decisions these bodies make, often having simple motions demanding transparency and accountability overruled.

At the provincial and federal levels of government, it is also difficult for postsecondary students to have their voices heard. Given the close relationships university administrations have with Ministers and the deep pockets of many other lobbyists, legislators are likely to brush off the suggestions of individual students.

In light of these imbalances of power, students’ unions play an invaluable role advocating for students’ interests on campuses and to policy makers at all levels of government. Over the decades, these unions have proven to be effective representative bodies for students, capable of bringing about change both within individual institutions and, when united at the provincial and federal levels, throughout academia and society.

The key to this successful advocacy lies in each students’ union’s autonomy and their unique ability to operate outside the confines of institutional hierarchies, free from the undue influence of university administrators. Successful student-driven advocacy often involves putting pressure on decision-makers at institutional, provincial, and federal levels through campaigns, mobilization, and direct action. It is through this organization that students are best able to hold administrators and politicians accountable.

Understanding the vital role students’ unions play both on campus and at Queen’s Park, it is deeply concerning that the Ontario Government has recently targeted these organizations through its dishonest Student Choice Initiative, which regulates university ancillary fees. These are fees students pay in addition to tuition fees, including fees for services like gym access, technology support, walk-safe programs, student papers, and students’ union membership dues.

This policy directive has divided all ancillary fees into two categories, essential and non-essential. While the government allowed universities to make many of their own fees essential, including gym access and technology charges, they were clear that many fees decided through democratic referenda, including those for students’ union membership and campus media, would now be optional.

This initiative has major implications for students’ unions to effectively represent student interests on campus. Since some students will inevitably opt out of paying union dues to save money, students’ unions will lose vital funding and the ability to speak on behalf of the entire student body. As a result, optional membership threatens to undermine the democratic systems that have allowed students to make collective decisions and leverage their unified strength.

Optional membership threatens to undermine the democratic systems that have allowed students to make collective decisions and leverage their unified strength.

Much of the work undertaken by students’ unions focuses on providing support for marginalized students on campus. Food banks, sexual violence support lines, free legal aid services, tax clinics, centres for LGBTQ students, advocacy on behalf of Indigenous and racialized students, and peer-to-peer support, are just some examples of the work students’ unions do to support vulnerable groups. The inevitable cuts to student-run services caused by the Student Choice Initiative will disproportionately impact those students who rely on this support the most.

The government of Ontario has argued that the Student Choice Initiative will save students money. In fact, this couldn’t be farther from the truth. The majority of ancillary fees have been deemed essential and continue to be mandatory. Meanwhile, the total savings a student might realize by opting out of all non-essential fees might range anywhere from a few hundred dollars to less than the cost of a meal (depending on the institution), with the potential of preventing the student from accessing vital services and supports when they need them.

In effect, the Student Choice Initiative takes unfair advantage of the high cost of tuition imposed by successive governments and university administrations by proposing that students struggling to make ends meet might save money by opting out of the advocacy organizations that have fought to prevent high fees in the first place.

It is also important to point out that the fees being made optional were ones supported by students through democratic votes, while many still mandatory fees have been opposed by students. In introducing this directive, the government is forcing students to continue to pay fees they object to, while jeopardizing vital services they support. As this policy comes into force, it becomes clear that its main goal is to silence those student voices that would dare to criticize Doug Ford’s government.

Implications for progressive organizing and the labour movement

In recent years, students’ unions have successfully advocated for major changes at institutions across the province, including investments in mental health services, the implementation of mandatory sexual violence policies, and the elimination of flat fees at the University of Toronto (an attempt to make students taking three or four courses pay the same tuition fees as students taking five). As was evidenced in recent strikes at York University in 2018 and across the college sector in 2017, students’ unions also play an important role supporting the broader labour movement in the fight for equitable pay and better working conditions.

Students’ unions don’t just work for the benefit of students today, but also for the benefit of future generations who will reap the rewards of their advocacy. Looking back, it is evident that the broader student movement has played an important role fighting for social justice around the world. There is no doubt that the success or failure of the Student Choice Initiative’s ability to undermine students’ unions will be viewed as a test case for future attacks on progressive movements and labour unions, including those on our campuses.

As a result of the Student Choice Initiative, there have already been significant changes at institutions across Ontario that have affected both students and workers. Many services have been cut, staff laid off, and opportunities lost due to the uncertain nature of the opt-out process. Indeed, planning and resource allocation in an environment where year-to-year funding is in doubt threatens to become a major barrier for many impacted organizations.

However, there have also been tremendous displays of hope. Whereas the Student Choice Initiative was meant to divide and weaken students, many students’ unions are going out of their way to be inclusive of both members and non-members, despite the costs.

In response to the government’s attempt to defund services and campus media, many students’ unions are working collaboratively to find new solutions to keep these operations running. In fact, groups and individuals from across the political spectrum are speaking out in defense of the importance of student organizations for the future of our postsecondary institutions.

Students cannot assume that their voices will be listened to and respected by decision-makers without effective external organizing that pressures university administrations and governments. Without strong students’ unions, students stand to lose the political capital they have gained over the decades and be completely shut out from institutional and governmental decision-making structures.

Now, more than ever, it is important for all students to get involved and maintain their membership with their students’ union. This represents the most effective way for us to shape the future of our education system.

Groups and individuals from across the political spectrum are speaking out in defense of the importance of student organizations for the future of our postsecondary institutions.

Faculty, administrators, and workers on campus also have an important role to play, for this is about more than students’ union autonomy. How we collectively respond to the Student Choice Initiative may not just define the direction of postsecondary education for years to come, it may determine whether this government decides to introduce a Workers Choice Initiative as a means to destabilize and undermine Ontario’s labour movement.

Felipe Nagata is Chairperson of the Canadian Federation of Students-Ontario and a student at the University of Toronto-Mississauga.