It’s never okay: Working together to end sexual violence and harassment on campus

By Premier Kathleen Wynne | From the Winter 2016 Issue

The Ontario government has unveiled a new action plan to stop sexual violence and harassment. 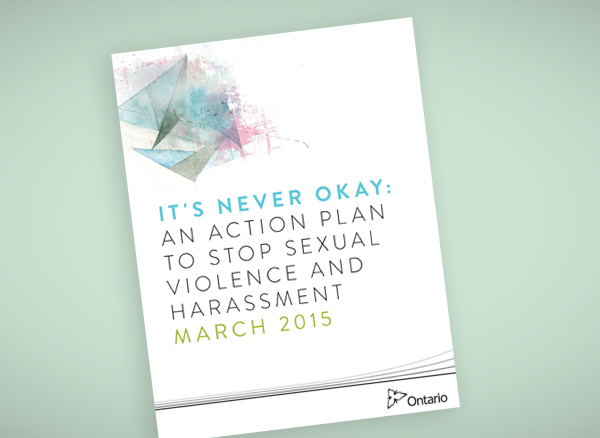 Last year, I spent a week visiting some of my favourite places in Ontario: our college and university campuses. It was a great opportunity to speak with students about the things that matter to them, and one issue in particular stood out. Students raised it everywhere-—from Sudbury to Ottawa to London. Over and over, at every college and university I visited, the topic of sexual violence and harassment on campus came up. I felt frustrated; I couldn’t believe that these same issues that we talked about when I was an undergrad student in the ’70s were still so prevalent today.

But talking to these young men and women also made me feel motivated. I knew that our government had to do something to help address the ongoing problem of sexual violence and harassment in every corner of our province. Not just on campuses, but in the bars students go to, in the workplaces they will enter after graduation, in the relationships they have moving forward.

A few months later, we released It’s Never Okay: An Action Plan to Stop Sexual Violence and Harassment. The action plan is about helping more survivors feel that it’s safe to come forward—and better supporting them when they do. It’s about strengthening our laws so that people feel better protected at work, on campus or in the community. It’s about providing more funding to crisis centres so they can continue their vital work.

And in all of this, most fundamentally, It’s Never Okay is about challenging and changing deeply held beliefs that contribute to rape culture, misogyny and sexual violence in our society.

It is staggering how often we are told lies about the prevalence of sexual violence in our society. In reality, one in three women will experience some form of sexual violence in her lifetime. Yet too often language is employed to cast doubt on the veracity of a survivor’s account and unsubstantiated statistics are carelessly tossed around. And so the false perception that sexual violence is not a problem in our country persists.

When we talk about the way a woman dresses, her job, how much she had to drink—these are parentheses. They are parenthetical excuses our society uses to explain away tragedies. They are used to dismiss the lived experiences of college and university students, who started postsecondary to grow as a person—not to be taken advantage of and told it’s their imagination, or worse, their fault. They are used to justify the appalling fact that our country is witnessing an epidemic of missing and murdered Indigenous women and girls. Parenthetical excuses are used to make sexual violence implicitly okay. It’s never okay.

The reality is that these excuses are symptoms of our bigger problems. That’s dangerous, because when we focus exclusively on symptoms, we do nothing to fight the underlying disease. That disease is a society in which attitudes that lead to sexual violence and harassment are still very much a part of our culture. Sometimes quietly, other times forcefully, and always destructively, these attitudes are part of our power structures. As educators, you’ve probably seen these same attitudes persist on cam-pus, year after year.

What’s more, the perpetuation of myths and stereotypes that are rooted in misogyny and sexism not only contribute to these attitudes, they create an environment where those who are affected by sexual violence and harassment do not feel safe, do not feel heard, and do not feel they can come forward.

But little by little, we are making a positive change.

Recently, in the U.S. Presidential campaign, we saw a shift in the attitude toward sexual assault survivors who speak out. While one candidate spouts racist, xenophobic, and deeply sexist rhetoric, we’ve seen brave women come forward and talk about their experiences of sexual assault at the hands of this man. Their resolve to come forward and stand up for themselves is showing other women not to be afraid and that it is not their fault. It’s challenging the power imbalance that so often occurs in accusations of sexual assaults, where the benefit of the doubt goes disproportionately towards the accused. It’s imploring us to finally start believing women.

So we’re starting early and teaching young people about consent in our schools’ updated health and physical curriculum. By teaching students about respect and healthy relationships at an early age, we can help the next generation of university and college students better understand consent.
But we also know that this is just part of the solution. Teaching the next generation doesn’t help those enrolled today—the students whose stories I heard last year, and who continue to remind me why this work is important.

This positive change also has to come from the way colleges and universities address rape culture on campus. The sad reality is that many campuses are still not safe spaces for women. Sexual violence victimization rates are five times higher for women under the age of 35. That statistic, combined with the fact that most students find themselves in an unfamiliar, independent environment for the first time, means we must do more.

As part of It’s Never Okay, starting January 1, we are requiring all Ontario publicly assisted colleges and universities to adopt a sexual assault policy. It will be developed with input from students, and renewed, with student involvement, every three years. Student engagement is key to the development, adoption, and implementation of a successful sexual assault policy. We need students to know that their real-life campus experiences and concerns are being heard and taken seriously. We need them to see that a policy can lead to changes that better prevent assaults from occurring and better support students when they do.

So, while some institutions already have a policy in place, our new guidelines are an opportunity to engage with students and to strengthen your institutions’ commitment to addressing sexual violence and harassment.

We’re also making sure that universities and colleges provide easily accessible information about the services and supports that are available to survivors.

Survivors of sexual violence can find it incredibly difficult to come forward and share their story. As schools support survivors and responsibly address assaults, students can feel that it is safe to give information about their experiences.

And because, according to the Canadian Federation of Students, many on-campus sexual as-saults happen during the first eight weeks of class, we’re making sure students have the right information, starting the first week of orientation and continuing all school year for every year of study.

Throughout all of this, faculty will play an integral role. You are already such an important part of students’ lives. As caring adults, you set a positive tone and create a safe space for students as they explore their new postsecondary environment. This is a time in young peoples’ lives to explore, ask questions, and challenge themselves. And it’s the faculty of a university or college who help make this exciting time a positive experience as well.

Because it’s not just the lectures and the office hours that make faculty such a critical part of campus life. It’s the community-building each member does inside and outside the classroom. It’s the positive environment that is created when students feel like they can trust their professors and their school. It’s about creating a place of learning that emphasizes and prioritizes the safety and respect of its students. And thanks to the academic work of many feminist scholars, discussions of sexual vio-lence and harassment, gender discrimination, and other social justice issues have been carried from the classroom into the collective consciousness. With the support and guidance of student groups and the dedicated faculty we have across Ontario universities and colleges, the opportunities to chip away at the culture of misogyny and harassment are endless.

We all have a role to play in stopping sexual violence and harassment, and we need to use every tool at our disposal. Campuses are a space bursting with creativity and energy—from the freshman who joins the school newspaper to the professor who helps run the gender diversity club.
I know so many colleges and universities are already working tirelessly to make sure students feel safe and informed—thank you.

Universities and colleges should be a safe space to discover who you are, what you want to be, and where you want to go. Let’s work together to make it a reality for every young person.

Kathleen Wynne is the Premier of Ontario.