The public value of public funding for research

Basic, curiosity-driven research continues to take a backseat to privately and publicly funded research linked to short-term commercial profit. We must push back against this trend and reinvest in the core mission of the university. 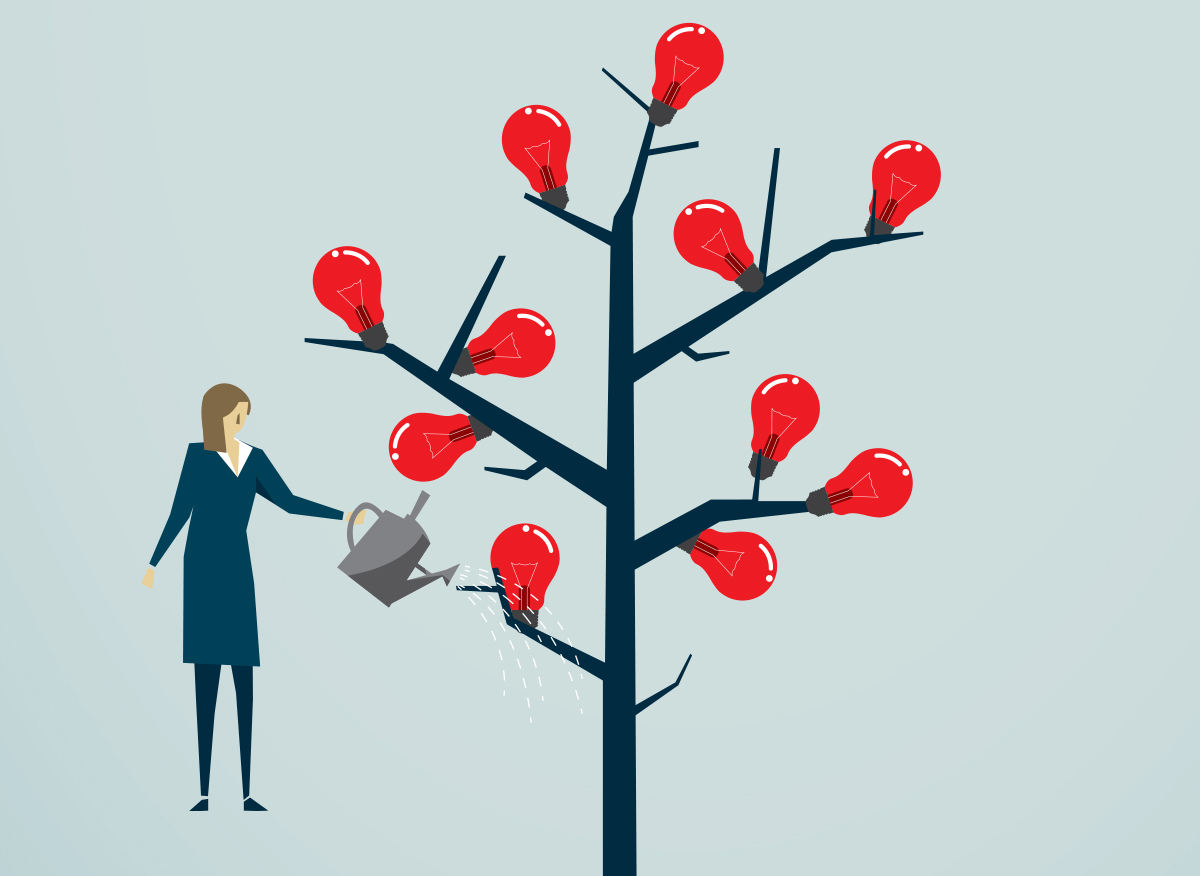 What machine has changed social life more than the networked computer? If we could go back in history to the point where computing technology was just emerging, armed with the knowledge of how essential computers have proven to be, who would not have invested in their development?

Now change the picture somewhat. From the current user’s perspective, the computer is part television, part calculator, part typewriter, part phone, and part stereo. We think of it as a multipurpose physical machine, attractively designed and marketed as an essential lifestyle and business device. However, the real heart of the machine beats beneath the design, the high-resolution display, the wiring, and the microprocessors—at the heart of every iteration of the computer has been the machine language that enables the computer to receive instructions from its user and process information.

Now, imagine that you are an investor looking at a messy chalkboard scrawled with the mathematical logical proofs that would one day become the foundation of computer machine language. This mathematical logic would have been, and still would be as indecipherable to most people as hieroglyphics were to Europeans before the discovery of the Rosetta Stone. Most likely, you would not have understood that you were looking at the future of communications and information processing, not to mention science and entertainment. You would have kept your money in your pocket and gone off to invest in the soybean futures market instead. Nothing against soybeans, but that would have been an unwise investment decision in the long run.

Private investors tend to only think in terms of the short run, the immediate pay-off that will come in the next business quarter or year. Human knowledge, by contrast, develops only over the long term. The step to the next plateau, the breakthrough, is often not visible; it sometimes depends on happy accidents, and almost always involves formal or informal cooperation and collaboration. Further, it often is not coextensive with the immediately useful or saleable. These conditions are opposed to the typical requirements upon which private investors would insist: predictable, low-risk returns; exclusive control over the product; secure intellectual property rights; and immediate marketability.

Private investors want some assurance that what they are investing in will pay off. Universities are institutions whose entire purpose is the production and dissemination of knowledge in the widest and deepest sense of the term, and they cannot fulfill these missions if they are forced to rely upon private funds. Private investors seek to grow their capital by funding the development of products and techniques that can be commodified and eventually sold. Whether one accepts the focus on the growth of money-value as ultimately important or not, it is incompatible with the growth of knowledge.

Even if we disregard every other social and human interest and think only about the importance of innovation to the growth of GDP (business leaders and politicians chant this mantra non-stop), these innovations will dry up unless basic scientific research is funded. Basic research—as the example of mathematical logic illustrates—often has no short term use-value, can be inscrutable to non-experts, has uncertain practical implications, and thus can appear as a waste of money from a perspective concerned with short-term gains. If researchers have to rely on nothing but private funds geared to short-term returns, basic research would soon become impossible and the impact would be devastating to the economy and GDP.

Whether one accepts the focus on the growth of money-value as ultimately important or not, it is incompatible with the growth of knowledge.

Venture capital pools (groups of investors that target emerging companies), to some extent, understand the problem of short termism and try to correct for it. Even if they are successful in overcoming that problem, two more decisive incompatibilities with private funding appear.

The market only cares about certain types of knowledge

The first incompatibility is that the set of issues worth investigating is not the same as the set of products that can be sold. Universities are not the appendages of commodity markets, but institutions that create and protect spaces where free inquiry and creation are possible—spaces unconstrained by factors extraneous to the problem being investigated. Without public funding, it would be impossible to pursue research in any field that could not prove itself useful in the crucible of business competition. This would rule out most social scientific and humanistic research, most artistic creations, and also much of the basic but important research done in the sciences. The market does not care whether string theory turns out to be true or about the weight of the Higgs boson. That, however, does not mean that those problems are not worth solving or will not prove vital to future innovation.

The second incompatibility is that the set of problems worth solving is not coextensive with the set of commodities the solution might potentially generate. A problem is important to solve when its solution will improve a crucial dimension of human life. Human beings are not simply bellies and wallets; we are questioning minds who want to know who we are, where we are, why we are here, whether it matters, and what we ought to do with our lives. These questions are philosophical, but their solution is not the province of philosophy alone. Natural and social sciences help explain where we are (what the origin and structure of the natural world is, what the history and structures of various social worlds are, and how we can keep ourselves healthy). Religion, art, and the humanities, broadly construed, offer answers to the question of why we are here and whether it matters. None of these answers is worth any money, but no sort of human life is imaginable without exploring these questions. No human culture over the past several thousand years has failed to pose them in one form or another. The belief that there is some sort of algorithmic solution that can provide final and definite answers to these questions will prove a peculiar but transient delusion of our capitalist technocratic culture.

Thus, work will have to go on in all the fields engaged by these problems. The history of the disciplines of human inquiry is formed from the criticism of attempts to solve these problems. Through the criticism of given answers, the natural and social sciences overcome constricted paradigms, humanistic research becomes conscious of exclusions and false constructions of others, and the arts overcomes derivative and moribund forms to find fresh ways to say what needs saying. Since public funding is not, in principle, answerable to any sectional or private interest, it is the best means to ensure that this history of critical inquiry continues.

Since public funding is not, in principle, answerable to any sectional or private interest, it is the best means to ensure that this history of critical inquiry continues.

Public funding for the public’s benefit

Unfortunately, public funding is often held hostage by sectional and private interests and so it is important to distinguish between the principle that underlies public funding and its source—the government. When public funding is tied to the short-term interests of governments seeking re-election, bogus metrics unconnected to the real mission of universities, military prerogatives, or short term business priorities, public funding becomes entangled in the same problems as private funding.

The investments announced in the most recent federal budget are uneven in this regard. On the one hand, the increases in base funding to the Tri-Councils is good news. The budget announced an investment of $925 million dollars over five years for NSERC, SSHRC, and CIHR. It also targeted investment in indigenous scholars, early career researchers, and interdisciplinary research. On the other hand, this funding is only just over half the amount recommended by Investing in Canada’s Future: Strengthening the Foundations of Canadian Research, a report commissioned by the Federal Government and delivered by former University of Toronto President David Naylor. The sort of “high-risk” interdisciplinary research the government wants to fund seems to privilege work that promises to lead to spectacular monetary rewards. Still, whatever criticisms might be made of the details, the federal budget certainly recognized the essential role that public funding plays, and will hopefully become a model that provincial governments follow.

What does that type of public funding mean in practical reality? It means stable funding adequate to the intellectual purposes of the university. In turn, stable funding adequate to those purposes means, in the first instance, investment in full-time, tenure track faculty positions (both new positions, and converted positions for research-active long-serving contract academic staff). In the second instance, it means ensuring that universities can maintain the physical infrastructure research requires, including laboratories and real libraries. In the third instance, it means both adequate funding for granting agencies and regulations that ensure the pre-eminence of peer review and put aside extrinsic considerations about short-term usefulness or “knowledge mobilization” in the distribution of grants. There are, of course, well-known problems with peer review: methodological gate-keeping, refusal to acknowledge marginalized voices, and heterodox approaches. However, none of these problems will be solved by holding everyone hostage to private sector priorities or imagining that there is some magical algorithm that can determine funding priorities.

In order to ensure that these values are served, universities have to continue to press governments for adequate funds (not only targeted research funding but basic funding adequate to fulfill their mission). If universities cease to be truly public institutions because they depend on tuition fees for most of their revenue, then they can hardly be a strong voice for public research funding. Moreover, if universities continue to marginalize faculty voices on Boards of Governors, compromise collegial governance, and accept, without critique and resistance, the irrationality of the metrics-as-measure-of-excellence fad, they will fail in their mission to function as institutions of publicly-valuable research and higher education.

None of these goals can be achieved without professors, in alliance with students and other campus groups, working together to ensure that the historic mission of the university is respected and guides all institutional decisions, identify and overcome roadblocks to the coherent fulfillment of this mission, and push for the institutional changes necessary to keep universities connected with the changing social dynamics and problems of the public they serve.